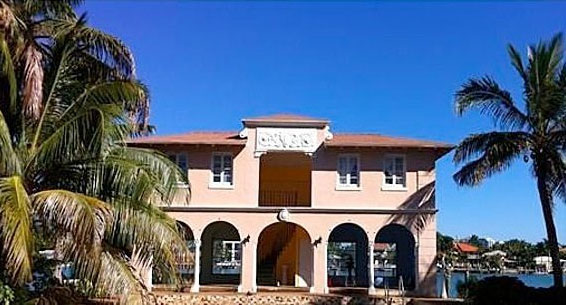 Commissioned by Anheuser-Busch beer brewing heir Clarence Busch in 1922—yes, that’s during Prohibition—this Miami Beach estate was snapped up in 1928 by none other than the infamous Chicago gangster Al Capone.

[ad#Google Adsense u tekstu]Just as Capone’s Austin, Tex. boot shop has been transformed into a lavish family home, this place, too, is undergoing a substantial renovation. The pool house, which was built by Capone to house his security detail, seems to be the only building on the compound not currently overrun by renovators. But, given that the estate sold for just $5.65M last fall, something major must be brewing to justify the new price tag of $9.5M. The seven-bed, seven-bath waterfront palace has, according to the Wall Street Journal, a law-abiding owner these days, GridPoint founder Peter L. Corsell, who allowed the previous owner to remain in the home for three years after signing a contract in 2008.

Alphonse Gabriel “Al” Capone (January 17, 1899 – January 25, 1947) was an Italian-American gangster who led a Prohibition-era crime syndicate. The Chicago Outfit, which subsequently became known as the “Capones”, was dedicated to smuggling and bootlegging liquor, and other illegal activities such as prostitution, in Chicago from the early 1920s to 1931.

The L.A. Home of Kristen Bell Falls into Foreclosure