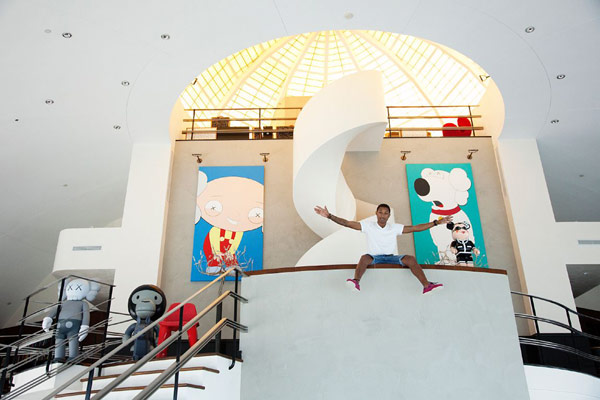 We are certain some of you Hip-hop enthusiasts out there wondered how the crib of American rapper Pharrell Williams looks like. Well, we found his 9,000-square-foot penthouse duplex in Miami, Florida, listed for sale for $16.8 million. The self-entitled Kidult (you guessed right, this is the result of merging “kid” and “adult”) described his home as a reverse fishbowl, one that allows him to see everything happening outside, without him being observed.

The penthouse features five bedrooms, six and a half bathrooms, a home theater with red leather seats, and a triple-story main room. According to the official description of the property, the apartment also offers expansive views of the ocean, the bay and the city: “Expansive living space backdropped by walls of glass. Fine granite and wood floors, each room is dressed with luxury appointments and custom built-ins. Spacious pool terraces, second level pool, summer kit and rooftop terraces all combine to create a tropical feel atop the world!“

Pharrell Williams (born April 5, 1973), professionally known as Pharrell, is an American rapper, singer, record producer, composer and fashion designer. Williams and Chad Hugo make up the record production duo The Neptunes, producing hip hop and R&B music. He is also the lead vocalist and drummer of hip-hop band N.E.R.D, which he formed with Hugo and childhood friend Shay Haley. He released his first single “Frontin'” in 2003 and followed up with his first album In My Mind in 2006. As part of The Neptunes, Williams has produced numerous hit singles for various musicians. The two have earned three Grammy Awards amongst ten nominations. He is also the co-founder of the clothing brands Billionaire Boys Club and Ice Cream Clothing. He is a member of the supergroup V.A. Playaz with Fam-Lay, Clipse, Skillz, Missy Elliott, and Timbaland & Magoo.