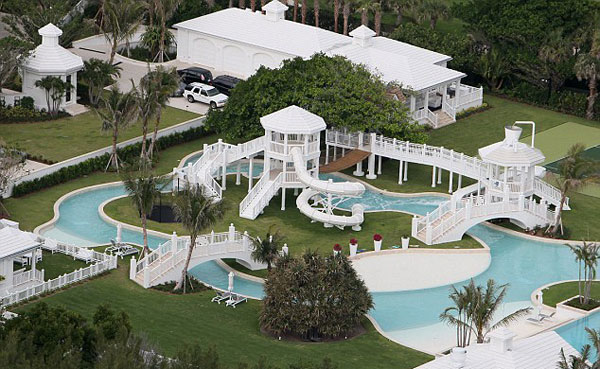 Celine Dion and her husband Rene Angelil recently had a mansion constructed for their family in Florida. This new project costed the couple $20million (£13.9million) and a lot of neighborhood racket.

[ad#Google Adsense u tekstu]An aquatic wonderland, this 9,825 square feet home is also located in the proximity of the ocean. Its exact location is on Jupiter Island, where some of the wealthiest stars live. The miniature water park includes two pools, two water slides and a small river with a generated current in order to carry the water around, which makes the total water amount needed for the system to work equal to 500,000 gallons. Apparently the construction of the house brought some serious complains from the community, as the construction of this system led to a drought on the island. The residence houses eight bedrooms, an underground garage, a large wardrobe and a gym. We are looking forward to your impressions on this post.

Céline Marie Claudette Dion, CC OQ, (born March 30, 1968), is a Canadian singer. Born to a large family from Charlemagne, Quebec, Dion emerged as a teen star in the French-speaking world after her manager and future husband René Angélil mortgaged his home to finance her first record. In 1990, she released the English-language album Unison, establishing herself as a viable pop artist in North America and other English-speaking areas of the world.